Your shopping cart is empty.

Your shopping cart is empty.

When we’re admiring a painting, there are a host of factors that can draw our attention. One of the most obvious is color, which we discussed in the last blog. Color selection can greatly change your emotional perception of a piece. But there are other, more subtle aspects that also influence how a work of art affects you.

An equally powerful tool at the artist’s disposal is composition. That’s a fancy name for a basic concept: composition simply refers to how the artist places the elements we see in the art. What are we seeing? Where is it in the space? How far away are we? What angle are we viewing from? And just as important, what are we not seeing?

What a painter chooses to show us and where it’s placed can have a large effect on the subject matter. For a basic example, let’s look at two very good pups.

Both pictures are of seemingly happy dogs, sitting on their haunches. But they have a different effect in large part because of the composition. In the first picture, we see Chewy filling up the canvas in the center of the frame. The background is flat, and there is little implied context to the image. We have no real indication of what he’s doing or the world around him. The strong, central placement of the subject with little distraction creates a simple yet bold portrait.

In the second picture, our pup is sitting in a field of grass. He’s a little to the left side of the canvas, and there’s negative space – the open area around the subject with nothing for the viewer to focus on. So the placement of the dog is smaller on the canvas, off center, and there’s a context implied. We start to form a story based on what we see of his situation. This leads to a more complex emotional reaction, but it’s also more ambiguous.

One is not better than the other. They simply have different functions. Chewy serves as a wonderful portrait of a family dog. What about Me works less as a portrait, instead creating a story in the viewer’s mind. Is the dog out playing in the field? The open space makes it seem more alone.

To explore a little further, let’s look at Tango. 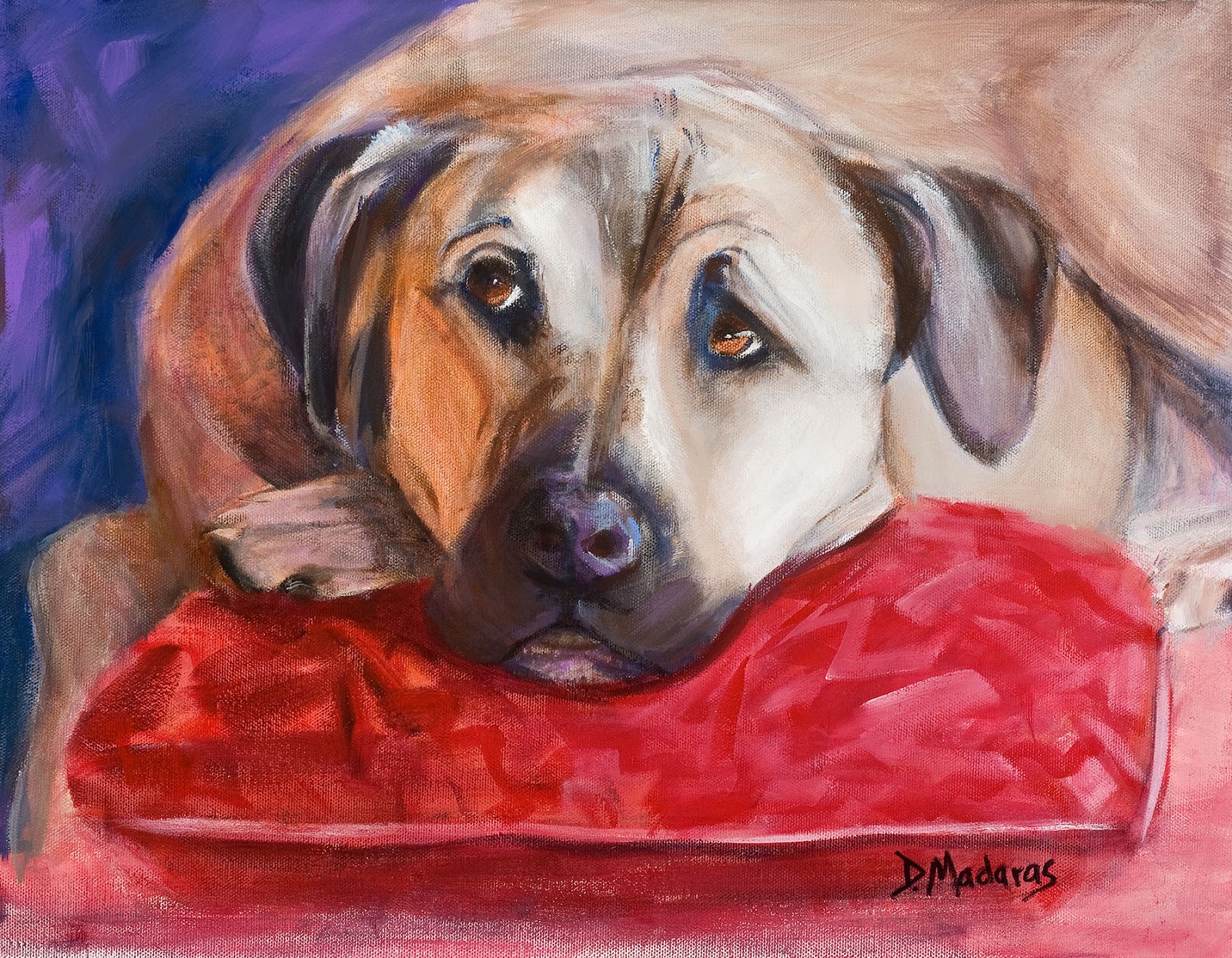 Once again, we have what is clearly a very good pup. But the composition is quite different from the other two paintings. Instead of a full portrait, we have a close-up. This is a case where what isn’t shown is important. We aren’t focusing on anything extraneous, only his cute face. Just like in the movies, a close-up tends to make the viewer search for emotion. It allows us to see the extra detail in his raised eyebrows, the way his ear is cocked, and the light reflection in his soulful eyes.

Similar to Chewy, we aren’t given much in the way of surroundings. What we do have is the pillow that his jaw is comfortably resting on. It adds a certain context to the expression Tango is making for us, as we begin to make assumptions about the type of life he leads. (Diana says Tango lives at the dog spa!) Also important is the angle. We are not above the dog, looking down on him. That would tend to give the subject of the painting a more subservient aspect. Instead, we are at his level, experiencing this moment with him.

Like the other works, this could be described in simple terms: it’s a painting of a dog resting on a pillow. But because of the intimate composition, we now have a fleeting glimpse into a moment of feeling for this pampered pooch.

Give it a try when you’re studying a painting. How is the painting composed? And how is that affecting your experience?

Also, maybe now is a good time to take your dog out to play. 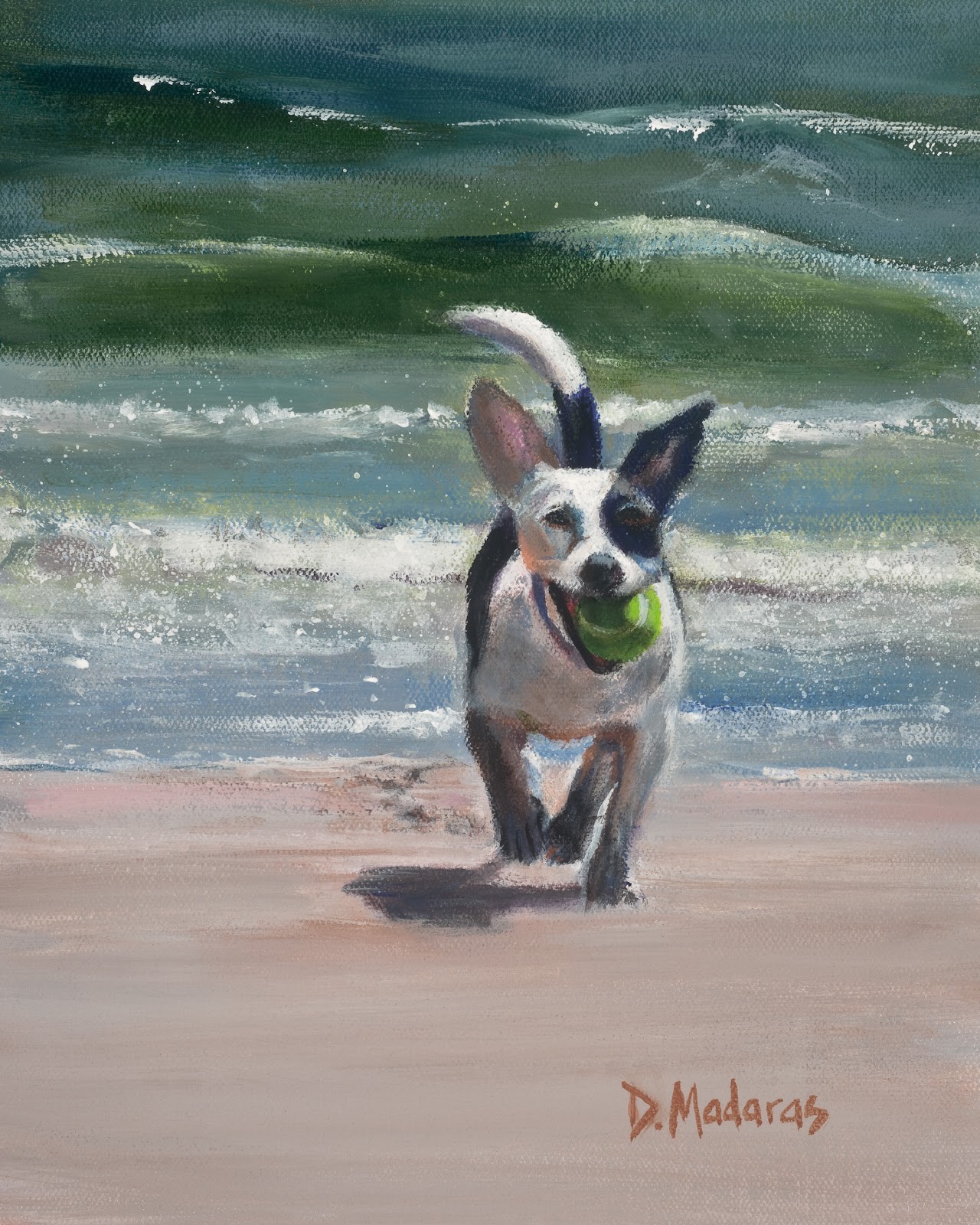 Dog on the Beach

The Quiet Places of Osa
December in the Desert: Tucson Happenings Artist Profile
The Story Behind the Spirit Animal Series
Where is Diana?
Inspired by the Colors of Arizona
Can Art Help Improve Mental Health?
Adventure at Saguaro Lake Ranch
The Face on Mars: A Focus on Focal Points
A Crazy Start to a Painting
Cactus Composition: A Bigfoot Blog

This presence of this badge signifies that this business has officially registered with the Art Storefronts Organization and has an established track record of selling art.

It also means that buyers can trust that they are buying from a legitimate business. Art sellers that conduct fraudulent activity or that receive numerous complaints from buyers will have this badge revoked. If you would like to file a complaint about this seller, please do so here.

This website provides a secure checkout with SSL encryption.

This is only visible to you because you are logged in and are authorized to manage this website. This message is not visible to other website visitors.

Below, select which favorite lists you would like to save this product into.

Get the inside story behind Diana's paintings AND access to special offers when you join.

Receive a coupon code for one FREE Madaras Print (image size: 9x6.75”) with a purchase of $35 when you sign up to join our email community! Select from more than 100 images.

(The coupon code will be emailed to you after joining.)

We hate spam and will protect your email address.